Due to the high production cost and complicated production process in the solar energy industry, the solar industry has low efficiency. In order to improve the efficiency of the industry, solar R&D personnel continuously break through the technology, and the operators perform maintenance and inspection from the operation to optimize system running.

The main applications of solar thermal imaging camera are as follows:

In the operation of the solar energy system, the highest discovery rate is the defect of the battery component, and the surface on the infrared heat map is the "hot spot effect". The components of these defects cannot convert the absorbed thermal energy into electrical energy, but only it is directly expressed in the form of "high heat". Since the temperature is much higher than other batteries, the hot spot is clearly visible through infrared detection.

The performance of battery components covered by dirt and shadows will be greatly affected, not only cannot generate energy, the deposition of dirt may even affect the operation of the system, the polarity of the battery components affected by the dirt will change, and discharge phenomena may occur. Direct conversion to thermal energy creates a hot spot in the infrared thermography.

Loose or faulty lines often cause failures in the overall or regional components. Due to a poor connection, the current path will cause problems, and the temperature will rise abnormally. When it is detected by an infrared camera, it will show an overall heat condition. The same traits are also produced when the tape is not connected to the battery or is in poor contact. 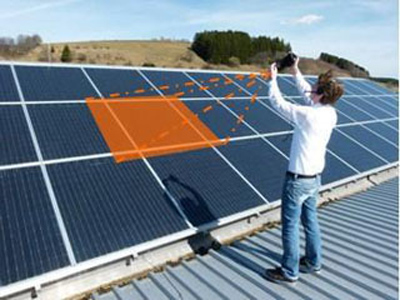